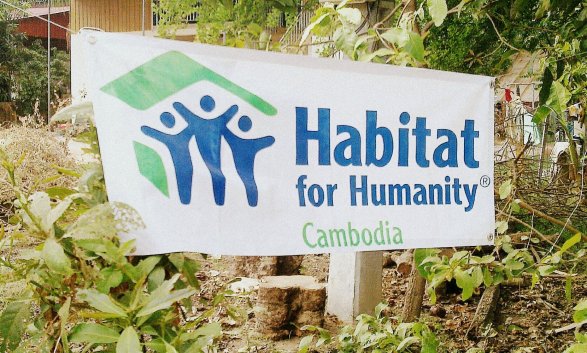 In April 27, 2013, about 600 Cambodian and foreign youth – most of them were high school and university students – appeared on the site of Youth Build. They had volunteered for the Habitat for Humanity Cambodia to help building houses for the Cambodian people living in poverty at Smile Village, Komreal Village, Prey Veng Commune, Dongkor District, Phnom Penh.

The vision of the Habitat for Humanity is to eliminate poverty housing and homelessness and create a world where everyone has a decent place to live.

Full of commitment and helpfulness, everyone was urging to start working. People were working so hard for hours even the weather was so hot, especially at the afternoon. Well, in the morning it was okay and nice, but at noon.

Sweating like a pig or Cambodian says like taking a shower, everybody as well as me who responded for growing the tree – a mango tree – still keep going on the works. There were three big groups: A, B, and C and many small groups in these had been divided. My friend and I were in group C which what the organizers called the VIP group (Not bad! But actually this was a late registered group) who needed to take care only planting the tree. The other groups’ works were to carry cement, move the brick, lay the brick, and etc.

Great! Growing the tree is easy, right? At first, I and my friend thought so; however, not really. It took us hours to move a soil into the hole because the soil was so hard and the hole was so deep. I guess I have been chopping for hundred times. We didn’t need to dig any hole since there was already many there, thus ours job was only to move the soil in to the hole in order to plant the tree. When the hole was full enough, we put the fertile soil in it, and now finally we could plant the tree and showered it. At last, we’ve got the smile of happiness and success. In overall, it was not that hard.

Growing a tree is like walking through ones’ goals. If we keep persistence, we will see a success; in contrast, if we give up, we will encounter a failure. Try once in your lives if you haven’t! This is my first time in my life too. You will find how tired you are, but fun and happy it is.

There will be other opportunities in the future. Find out more about  the Habitat for Humanity Cambodia and catch up volunteer opportunity follow on Facebook www.facebook.com/habitat.for.humanity.cambodia and website www.habitatcambodia.org/ 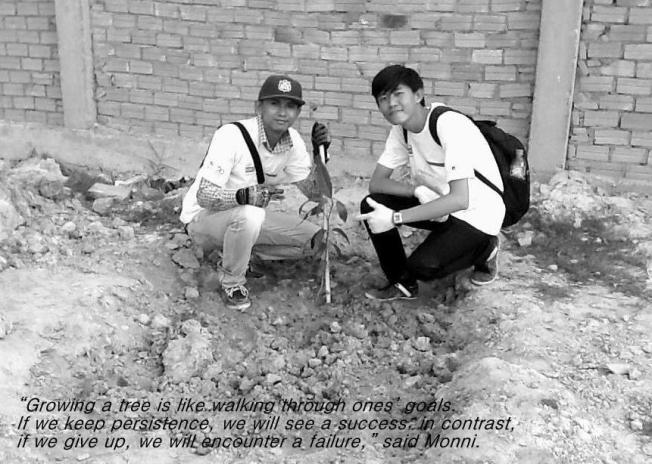